Service User Case Studies » “Without this support, I would have put off finding a care home for weeks.”

“Without this support, I would have put off finding a care home for weeks.” 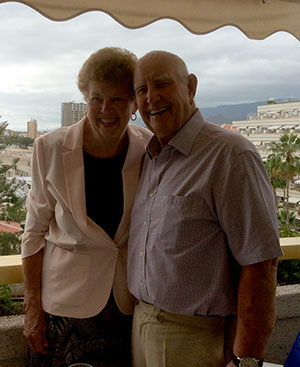 Brenda Adams from Southampton explains why our service is essential.

“When my husband Bill suffered a stroke, I imagined he would spend some time in hospital then come home, perhaps with some difficulties, but still with a quality of life. Sadly, it didn’t turn out like that.

Bill was 83 when he had a massive stroke which caused paralysis throughout the entire right side of his body. After he had been in hospital for three weeks, I was told Bill wasn’t improving and he would need to have a tube inserted into his stomach to keep him alive. I was with one of his three children at the time and we agreed that Bill wouldn’t have wanted that. Without the tube, we were told to expect he would only live for four or five more days.

But he amazed everyone by starting to swallow, becoming able to eat a little bit of mashed up food through his mouth. He progressed for another month until I was called in again by a doctor and told, bluntly, that he can’t remain in hospital any longer and I would need to find a nursing home for him.

I nearly passed out. I think we carry an in-built dread of care homes and the idea of ‘putting’ your loved one into one. There is the fear of the unknown and the guilt, because you think you should look after them at home.

Another doctor explained things better: that Bill qualified for continuing healthcare funding and that someone would be in contact with a shortlist of nursing homes for me to choose. The next day, which was a Monday, I got a phone call from a woman called Leanne. She was delightful, explaining everything so well and understood it was hard for me to confront the fact that I couldn’t look after Bill at home.

Leanne gave me a shortlist of three nursing homes which would suit Bill and had a high standard of care. She asked when would I be able to look. I said I wouldn’t be able to look until at least the end of the week. Leanne said, gently, that the hospital staff were hoping I might choose earlier than that. Then she asked whether I would like it if she took me to view the nursing homes.

I was really delighted at the suggestion and agreed to go within a couple of days. This extra support made all the difference. Without it, I couldn’t have faced it and I would have gone back to the hospital and said – I can’t do it. I would have delayed everything by two or three weeks I’m sure, because I had such mixed feelings and didn’t feel up to it on my own.

I viewed nursing homes with Leanne and chose the second one we saw. I liked the fact that it was very open; you could see everyone and hear the staff as they went up and down the corridor, telling the residents they were bringing the things they wanted, talking to them all the time. It was also 1.5 miles from my house and had good reports and reviews.

They had one room available and as soon as I confirmed it was right for Bill, they suggested I bring personal things to make it as homely as possible before he arrived. Bill was an artist, so I brought some of his paintings and a TV, so he could enjoy watching football.

I knew he was in the right place from day one. I visited soon after he had moved there from hospital and found him in his room, comfortable in bed. A member of staff immediately brought us a tray of tea and cakes and told me how well he was settling in.

Bill was there for seven weeks before he died. I couldn’t have looked after him at home; I wouldn’t have managed a day, he needed proper nursing care. It was also far better environment for him than being in hospital. This experience has completely changed my concept of care homes.

I am so grateful for the support I received from my adviser, Leanne. She was there for me, not just helping me to choose the nursing home but helping with all the arrangements, calling me to let me know what was happening and explaining it all. Without her, I simply wouldn’t have been able to face choosing a nursing home for my husband and he would have stayed in hospital. This is such an important, essential service.”