“I had this enormous responsibility and I felt completely unprepared for it.” How CHS helped Larry to find the right care for June.

Service User Case Studies » “I had this enormous responsibility and I felt completely unprepared for it.” How CHS helped Larry to find the right care for June.

“I had this enormous responsibility and I felt completely unprepared for it.” How CHS helped Larry to find the right care for June. 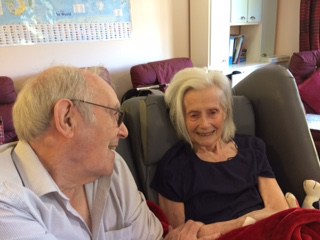 “June was diagnosed with Alzheimer’s in 2006 and at first, the symptoms were quite mild. I looked after her at home, although as her condition worsened people said it would be an impossible job and said I should get help. But I was convinced I could do it all by myself.

By February this year (2019), things were getting impossible. June’s legs just gave way and she couldn’t stand up at all. We used to enjoy going for car rides in the countryside, but on one occasion, she slid down onto the floor of the car as I was driving. As a result, June was admitted to the Royal Surrey Hospital where I found out she was severely dehydrated and that she would never be able to walk again. A member of staff asked me what I thought I should do.

I had this enormous responsibility and although I knew June needed full-time medical care, I felt totally unprepared for it – I felt very alone. It was clear that June needed to go into a care home, but I didn’t know where to start. I had some previous experience of trying to find a home on my own, having started to explore options 18 months earlier, and had found some were exorbitantly expensive and few had instant vacancies. I didn’t know where to start again while June was in hospital, and with all the worry and emotions surrounding the situation

Then I got a phone call from someone who introduced herself as Sarah from CHS. She said she had found three care homes that did have vacancies which could be suitable for June and asked whether I would like her to join me on visits to see them. I was very happy for her to do this.

Sarah was very calm and matter-of-fact. I wasn’t keen on the first place we visited, which was two small old houses joined together, but I felt very positive about the second. It was a modern, clean, purpose-built facility with a dementia ward where I noticed every patient had their own nominated carer – they explained this was so they could really get to know people and build relationships. The third home didn’t seem as good as the second but provided a benchmark.

Looking back, it all happened quickly, but I didn’t feel rushed and I had time to think about it all carefully. I had my first conversation with Sarah on the Thursday afternoon and saw the three care homes on the Friday and Saturday. I opted for the second, and by Monday was told June was moving out of hospital and into the home. It all happened in just four days, including a weekend, and would not have been possible without Sarah’s wonderfully calm and efficient help.

The home has proved ideal – the staff are all are so kind and gentle, not only with June but also with me. I suppose that on my own I would have found somewhere in the end, but it would have taken a long time and I doubt it would have been so good.

June has settled in and is happy – she is in a caring place where her needs can be met in a way I was eventually struggling to manage. We have been together for 65 years – 62 of them married – and I can still spend time with her without worrying.

I am so grateful for the fantastic support I received from CHS (and Sarah) during a very difficult time. I don’t know what I would have done without it.”