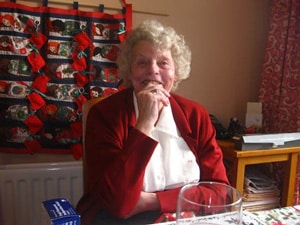 “Mum is 87 and managed really well living at home, but during the past two years, her health started to go downhill. She had two periods in hospital, first for heart problems and then for a stroke and after that, her mobility became a lot worse. She has also been prone to spells of depression.

However, Mum wanted to return to her own home, supported by a package of care. It involved a carer coming in for two sessions of half an hour each day, the first being to help her get up in the morning, wash and get dressed and the second to serve lunch and ensure she had something for tea.

The problem was that the service was so unreliable. Sometimes it would be 11am before the carer came to help Mum get up and then the next carer would come for lunch just an hour later. Sometimes, no-one came at all. Mum really struggled with it, understandably, and although there was no fault with the carers themselves, there would be a whole host of different people, so it was hard for her to build any sort of relationship.

I tried speaking to the agency, but they were a large organisation and we seemed like just a number to them. They never acted on my concerns or changed anything and it was clear that Mum’s health was being affected; she had suffered a number of falls. I didn’t know where to turn to and went to my local GP surgery and explained that we were really struggling. They suggested CHS Healthcare may be able to help and gave me a number to call. I was particularly pleased that after agreeing that I would like this support, the CHS Healthcare adviser called me; I didn’t have to call then or have trouble getting through as is often the case.

I explained the problems we were having and the lady from CHS Healthcare listened carefully. She asked me what Mum wants; what her priorities are. I said she wants someone to come at 8am to help her get up – she wants this to be something that she can rely on.

Straight away, CHS Healthcare looked at other care agencies in our area and quickly came back to us with a different agency. Everything was completely different – we can rely on carers to come on time in the morning to get Mum up. They seem to have more time and do small additional things, like adding extras to Mum’s meals that she particularly likes, which make it a better, more caring experience. They bring Mum fish and chips on a Friday or Saturday lunch time, which is a real treat that cheers her up.

Whenever issues have come up, I’ve been able to speak someone and quickly resolve things. They are a smaller agency and have a more personal, caring approach.

As Mum is a self-funder, we could have moved her care to another agency. But you feel very out of your depth – this isn’t an area that I have experience in and it is difficult to know what to expect and what to do. It was certainly a big help and relief to have an intermediary who can step in and sort things out for us.

Mum is so much better with her new carers – she feels more confident in them and is happier overall. At the age of 87, we don’t know how much longer she will be able to go on living alone, but this is her wish and with the right support, we are making this possible for her and that is so important.”

Looking for care?Go to Carehome Selection