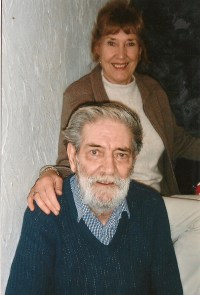 “My family have always been very close to my uncle Jeff. Although he lived in Southampton and all the rest of us are in north London and Hertfordshire, everyone would visit him when they could and stay in touch. Jeff was 82 and had been living happily in a care home in Southampton. We would sometimes suggest he moved back to London to be closer to us, but he was settled there and didn’t want the change.

In October, we had a phone call to say Jeff had been admitted to Southampton General Hospital. Mum, my brother, my sister and and I went straight down to see him and were visibly shocked when we saw him – he had lost a lot of weight and looked really frail. Then there was a further shock when he had a scan and we were told Jeff had advanced pancreatic cancer. Doctors were concerned that it may have already spread to his spleen and liver and we were told there may not be much time left.

Jeff had a wonderful consultant who told us about Fast Track. I hadn’t heard of it before, but she explained that it was a service for people who had a very limited time left, enabling them to spend their last days at home or in a care home, rather than being in hospital. She filled in the paperwork to make a case for Jeff straight away as she was going on leave; this is one of the many things people did that my family and I will always be grateful for. A day later, I had a phone call from the manager of the service and the following day, Justine from CHS Healthcare called me to introduce herself and explain how she would be supporting us. The speed of it all was incredible.

The Southampton care home where Jeff had been living was residential. He couldn’t return there as they wouldn’t be able to provide the level of support he needed. It seemed the right opportunity to find somewhere for Jeff in north London, where all his family could more easily be with him during his last days. Justine asked if there was anywhere we had in mind and we thought of a nursing home which was only five minutes away from where Mum lived. Another relative had lived there several years ago, had been very happy there and they also had an end-of-life unit, so it looked like a good choice.

From that point, Justine was on the case. The big challenge was the clinical assessment that the nursing home needed to carry out to check they could meet his needs. Obviously, getting a care home manager from London to travel to Southampton would be challenging if not impossible. But Justine found there was a sister home on the outskirts of Southampton and suggested the manager there could do the assessment. She kept moving things along in a really nice way; she was never pushy, but she was always conscious Jeff didn’t have long left and we wanted him in the right place with his family as soon as possible.

Justine would phone me with regular updates and sometimes at the end of the day, there would be a text message from her, just to explain where things were up to. The personal touch was so appreciated. One of the things that really impressed me was while we were waiting for the nursing home to carry out their assessment, Justine asked them if all went to plan, when would be the earliest date that they could accept Jeff. They said Friday and Justine booked hospital transport. This would turn out to be a godsend. Transport was booked at the beginning of the week, but there were some delays which meant the assessment didn’t take place until late on the Wednesday. They agreed they could admit Jeff and he left hospital on Friday as planned. If Justine had waited for the outcome of the assessment, it would not have been possible to book transport until after the weekend.

That time that she found for us would prove to be extremely precious. From the moment Jeff arrived at the London nursing home, he was surrounded by his family. Mum was there every day and myself, my brother and sister and all our children were constant visitors. Jeff passed away on the following Thursday, six days after he arrived.

Was it all worthwhile for six days? The answer is a resounding ‘yes’ – we all take great comfort in knowing Jeff was in a home, rather than hospital, with all his family beside him. For Mum, Justine took away all the worry of organising things for Jeff and allowed her to simply be with her brother for his last days, rather than worry about what was happening. For me, Justine was a rock – I’ve never had any contact with nursing homes before, I don’t know anything about the funding system. Justine helped us through it in the most supportive and thoughtful way. For the last 18 years, my career was as a trainer for John Lewis, so I place a very high value on how people are treated.

From the moment Jeff entered hospital in Southampton, everyone caring for him in the NHS had great compassion and kindness, then the support we all received from Justine was outstanding. We could not have asked for more and we are so grateful.”