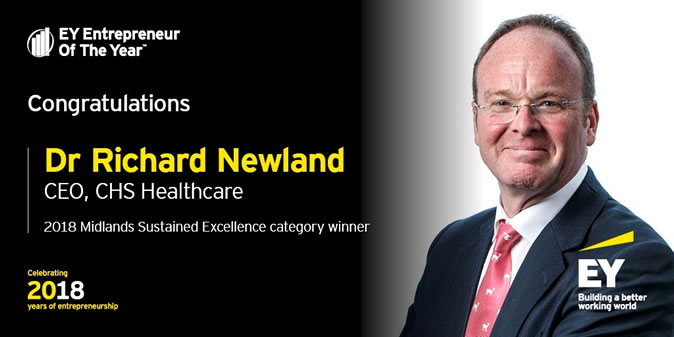 Accepting his award from the BBC’s Jeremy Vine, Dr Newland attributed the 20-year success of CHS Healthcare to working with “great people” at the company.

This is another major endorsement for CHS Healthcare, which earlier this year received the highest level of investment provided by BGF, the leading investor in small and medium size businesses.

The EY Entrepreneur of the Year awards are in the 20th year, recognising and celebrating the positive impact of high quality business leadership. The programme runs in four regions: London and the south, the Midlands, the North and Scotland.

Dr Newland won the award for “sustained excellence” in the Midland region, where CHS Healthcare remains headquartered and the company was established. Dr Newland was working as a Birmingham GP and through his work in general practice, recognised there was a lack of good quality advice and professional guidance for families making important care choices.

Using private finance to establish the company, the core offering was developed and remains the same today: CHS advisers help families to choose the right care and support them through every step in the process. Starting with a single employee, CHS Healthcare now employs 350 people with services throughout the country, from London and the south coast up to the north-east and Cumbria.

CHS Healthcare is the leading independent provider of services to support the discharge of patients from hospitals, by supporting families to make care choices, thereby reducing costly delays. The company also has the largest resource in continuing healthcare and complex care; delivering bespoke, specialist services to the NHS.

Some of Britain’s best-known business figures are former EY Entrepreneur of the Year winners, including: Stelios Haji-Ioannou, who founded the low-cost airline easyJet; Dragon’s Den investor Peter Jones, who started-up Phones International Group; and Richard Reed, CBE, one of the founding partners of Innocent Drinks.

Each winning entrepreneur is asked for their business motto. Dr Newland states: “Focus on what you are doing well, rather than what the competitors are doing.”

Gurinder Sunner an investor at BGF who sits on the CHS board said: “Winning the prize for sustained excellence is a fantastic endorsement of the hard work and tenacity of Dr Newland and the wider team.”

As originally seen on LinkedIn